Home / About Us / Pastor Joe Griffin 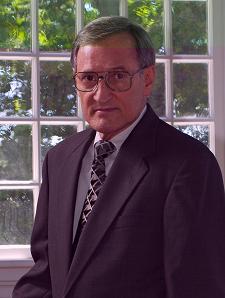 Joe Griffin was born July 29, 1941, the only child of Douglass and Nona Griffin of Troy, Alabama. His father was a partner in a tire dealership in Troy where Joe learned the work ethic, laboring in Southern Alabama heat during twelve-hour days in six-day weeks. This “talent” would pay great dividends down the road. His father is a believer and still lives in Troy. His mother was promoted in February 1993.

Joe was graced-out on January 17, 1965, his parents’ Silver Anniversary, when Jo Henra Pearson, his hometown sweetheart, joined him in the corporate relationship of marriage. During that time they have procreated on three occasions resulting in two sons, Shane and Shaefer, and one daughter, Shannon, the latter having acquired for them a son-in-law, Chris, in 1995. On December 4, 2001, Shannon and Chris provided them with their first grandson, Ryan, and on December 15, 2003, with their first granddaughter, Andie.

After graduation from Troy High School in 1959, Joe attended Troy State University for two years in General Studies. In 1962, he transferred to the University of Alabama where he majored in broadcast and film communications and minored in print journalism. While there, he was elected to Alpha Epsilon Rho, an honorary broadcast fraternity, and the football team won two of its twelve National Championships. Roll Tide! Upon graduation he was employed by WSFA-Television, the commercial affiliate for NBC in Montgomery, Alabama, where he worked in several areas of the business: production, direction, commercial writing, film editing, and sports programming. Subsequently he worked in educational television in Auburn. (Joe insists it is important to understand that he did not attend school at any time while he was in Auburn but simply worked at the television studios located on campus. Joe maintains it was a wonderful experience professionally but culturally left a lot to be desired.) He was happy to leave in 1969 when he was hired to develop and then operate the production studios at Troy State University. He worked for WTSU-Television at the time he decided to move to Houston and attend Berachah Church-November 1976.

From Recognizing the Curse to Mounting the Pulpit

In 1971, Ron Adema, then an associate of Rick Hughes and now pastor of a church in Birmingham, Alabama, introduced him to the tape ministry of R. B. Thieme, Jr. Joe was hooked immediately and began intensive study of his teachings. Mysteriously, without making any personal effort of any kind, he found himself teaching quite a number of Bible classes. This activity eventually included a regular weekly Bible study for students on the TSU campus, Sunday school classes, civic club meetings, church events, radio programs, and interim pastor for the Southern Baptist’s district association. The latter resulted in him becoming a circuit rider filling in for pastors throughout Pike County. After three years of this he realized, with great reluctance and gnashing of teeth, that he had The Curse. This illumination resulted in his eventual move to Houston and the ambivalent days of preparation at the epicenter of modern-day Christianity. Ambivalent because except for the halcyon days inside the walls of Berachah, life was hell-to-pay outside them. Beast Barracks was Colonel Thieme’s term for that period. Yet the combination provided Joe an environment for not only an intensified intake of doctrine but also the crucible of life’s experiences that he confronted daily forced him to experiment with instant application. He quickly learned that doctrine works, thus not only verifying the power of the Word of God but the validity of Colonel Thieme’s “innovative system.”

His goal was to qualify before the Lord as a worthy pastor of a local church and proceeded under the principle that God uses prepared men. Therefore, he sought to remain status quo until that day arrived. After eight years the pressures of the angelic conflict caused him to enter into a period of temporary insanity manifest by his decision in mid-1984 to enter Mrs. Katherine Tapping’s office with the proclamation, “I am withdrawing my name from the roll of pastoral candidates.” Berachah Church had licensed Joe to the ministry in 1981 and since that time he had been on call to assist the Colonel by performing weddings and directing funerals and he volunteered to continue those duties. He had even qualified for ordination in 1979 with the approval of his Doctrinal Questionnaire. However, the outside adversities had not only developed into internal stress but also physical fatigue. Thus, Joe hollered “Calf rope!” Both Katie and the Colonel surreptitiously ignored him. In October 1984, Katie received a call from a member of the pulpit committee of Grace Doctrine Church in St. Louis seeking a pastor to replace theirs that had resigned. With consent from the Colonel she instructed him to contact Joe. By December, its congregation had elected Joe to fill its vacated pulpit, just six months after his “resignation.” He began his duties of studying and teaching at Grace Doctrine Church in January 1985. Joe obtained the ultimate credential in May 1987 when he was ordained by Berachah Church. He was honored to be named by Colonel Thieme to the Berachah Church Ordination Council for the years 1995, 1997, and 2002. Joe received the highest compliment when in May 2000, he was selected among five others to deliver a tribute to the Colonel on the occasion of his fiftieth anniversary as pastor of Berachah Church. Joe continues to present doctrine to his congregation in the same fashion as in the beginning-a minor-league version of the theology developed and taught by R. B. Thieme, Jr., at Berachah Church. For a complete overview of that theology, please click on Doctrinal Statement where you will find The 40 Proclamations: The Theology of Grace Doctrine Church.

Have any questions about a recent lesson or need assistance with our site?

Joe Griffin Media Ministries is a non-profit organization focused on the production, publication and dissemination of the Bible teaching of Joe Griffin. Pastor Griffin currently functions as the pastor-teacher of Grace Doctrine Church in Saint Charles, MO. To learn more about our ministry, please visit the ABOUT US pages of our website.
EMAIL US